The absence of Millonarios in continental competition this year oblige the team to be part of the group stage of the League Cup. It will be a long road for the Ambassadors to reach the final stages of this competition.

Like any League Cup, the second division and first division teams face each other throughout the competition. This format is an excellent opportunity for Jorge Luis Pinto to try out new players. Some of them came from the youth system and debuted against Fortaleza. It’s an entirely different team with some previous subs like Oscar Barreto, Fabian Gonzalez, and Eliser Quiñones.

In the first half, Millonarios showed their formal tactical proposal, an offensive scheme using the wingers to expand the game to the wings. In the first 20 minutes, the Ambassadors thoroughly dominated the match despite Fortaleza’s counter-attacks. The rest of the first half was a bit complicated; both sides didn’t have a precision passing the ball. In the second half, Eliser Quiñones scored an unusual goal from the far distance, and it was enough to grab the first three points in this competition.

The most important part of this match is the debut of some players and others had already debuted before but was given another chance to prove themselves. Five of them were starters, but the most surprising player was the performance of Juan Camilo García. He was chosen as the man of the match, García exhibited great abilities to recover the ball, has a high precision to pass the ball, and contributes to moving the team in the defense-attack transition.

He spoke with us and said; “I was thrilled from the beginning, my debut in Millonarios was a thing that I was dreaming about since a long time ago… The manager told me to organize the midfield; he told me to give some order and balance. I feel that I have improved a lot since my experience with Valledupar, and this helped me to make the best decisions on the field.”

Next League Cup match will be against Fortaleza also, but in the visitor’s conditions on March 13th. 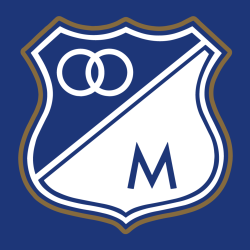 Millonarios
We use cookies to ensure that we give you the best experience on our website. If you continue to use this site we will assume that you are happy with it.Ok